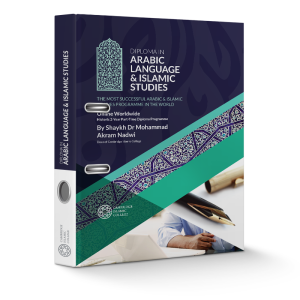 In Arabic language, the course will develop skills in reading, speaking and writing Standard Arabic. It will include a wide range of literary and non-literary reading matter to improve essential comprehension skills. Students will be trained to write good prose in Standard Arabic, i.e. prose that is clear and correct in its expression of thought and argument. The course will cover the rules of grammar and syntax (nahw and sarf).

By the end of the course, students should be able to understand how sentences are constructed in Arabic, how the different elements relate to each other, and how their relations affect meaning. They should be able, also, to apply this understanding to analyse passages of classical Arabic prose. In the hadith, the students will mainly study the important hadiths on which legal rulings are based – i.e. not the hadiths that are concerned with worship, moral virtues, events in the life of the Prophet and his companions, explanations of the Qur’an, etc. The principal text will be Bulugh al-maram. They will learn the meanings of those hadiths and the detailed discussions in the interpretation of them for law.

Time will be set aside for studying those hadiths which explain the fundamentals of iman and islam and how they help Muslims to develop piety, humility and good manners. In the fiqh students will learn how to do the acts of worship (prayer, fasting, zakah, hajj, etc.) properly and with understanding. They will study the main rules of family law, contract law, and lawful and unlawful in Islam. The principal text used will be a mukhtasar (concise or compact) compendium of laws, such as the Hanafi Mukhtasar al-Quduri.

This course is too short to discuss the sources, evidences and arguments adduced in the reasoning of jurists. In general Islamic studies students will learn the lives of the major Prophets, sirah of the Prophet Muhammad, peace be upon them all, and some elementary aspects of the history of Islam and Islamic society.

Dr Mohammad Akram Nadwi   NOW INCLUDES DeepDeen access! - During the two years of the course we will be providing COMPLIMENTARY full access to our DeepDeen platform. This includes all of Sheikh Akram's courses and goes well beyond DAIS.

Our hope is for this course to meet the basic needs of Muslims living in the West. By doing this course, alongside doing the national curriculum, they will get a secure foundation on which they can build intelligent, informed practice of their religion, and from which they can proceed to further and deeper study of Arabic and of the Islamic sciences.

We are aware that some of you might first want to try out a course before fully committing to it. Therefore we have introduced our new 30-Day Risk Free Enrolment Policy**. You can purchase any course and try out for up to 30 days and if you are unable to continue then you can cancel and request a full refund of your purchase, provided this is done within 30 days of purchase. You can now purchase any course at CIC with full peace of mind.

A brief introduction to the individual texts that will be used as course reference for the Diploma is given below.

This text constitutes the primary content for the course. This covers basic understanding of how sentences are structured in Arabic and the components that constitute the sentences. The book covers the building blocks of the language in detail while making good use of examples. Each volume of this text builds the foundation in a gradual manner making it an easy and interactive module.

Stories of the Prophets by Abul Hasan ‘Ali Nadwi

This is Part of a series developed by Shaykh Abul Hasan Ali Nadwi written especially for children to help them learn the Arabic language using prophetic stories written in a simple but clear Arabic style which become progressively more elaborate. Used as a primer for those learning the Arabic language, it is taught in Islamic seminaries around the world.

This text constitutes a concise introduction to the science of Arabic Morphology (As-Sarf).

This text constitutes a concise introduction to the science of Arabic Grammar (Al-Nahw).

Kalila and Dimna, named after the two jackals who are the main characters, is a book of fables originally written in Sanskrit sometime in the fourth century A.D. Three hundred years later Ibn al-Mukaffa’ translated it into Arabic in a style so lucid it is still considered a model of Arabic prose.

This is a collection of Hadith pertaining specificallyto the juristic rulings as taken from the major Hadith Collections (Bukhari/Muslim). Compiled by Dr Akram Nadwi.

Mukhtasar al-Quduri is one of the most celebrated and influential treatises in any Muslim school of thought and is one of the important works in the Hanafi school. It comprises of approximately 12,500 issues spanning the entire spectrum of fiqh.

The Hamasah (Arabic for “exhortation”) is one of the greatest anthologies of Arabic literature ever written. There are ten books of poems in the Hamasah, all classified by subject. Some of them are selections from long poems. This is one of the treasuries of early Arabic poetry and the poems are of exceptional beauty. The book of Manners is one of the ten books.

This is an advanced book in the science of Arabic Grammar, written by one of the experts of this field. This work was originally written as a basic work for students that needed a direct approach to Arabic Grammar. However after a short while, the author compiled an explanation for it so as to further ease the understanding of the student.

Alhumdulillah I have been exposed to a goodshare of Islamic Academic Institutions and scholars who have dedicated their life to teaching. Cambridge Islamic Collage is by far the most fruitful Islamic learning experience that I have had; the most authentic and rigorous scholarship with ease and convenience.

It is a great honour and privilege to be taught by a scholar of such great rank, knowledge and humility.  I am finding the course immensely rewarding in so many ways. Furthermore, the organisers – Cambridge Islamic College – are extremely professional and have provided a very structured and high-quality course,  both with the online facilities and on location in Oxford.

I found the rigorous curriculum both engaging and exciting. Alongside study of grammar – sarf and nahw both – we were reading modern Arabic prose and the acclaimed work on the lives of the Prophets, Qisasal-Nabiyyin. This last text is used in madaris worldwide; its inclusionin the curriculum made me realise that I was receiving an experiencesimilar to that of the typical madrasah student I’d dreamed of becoming even without leaving these shores.

Over the past year, I have had the honour and pleasure to study the Arabic & Islamic Studies Diploma under Shaykh Akram Nadwi. As the course has progressed from the basics of Arabic to more advanced topics, what really struck me was the emphasis that Shaykh Akram placed on reasoning and creativity over thoughtless memorization of facts.